Lydia Corbett and A Handful of Water

Walking into Lydia Corbett’s studio is to enter a different world of colour, warmth and dream.  The visitor is immediately drawn into her creative world of mythic women and children who are often as not members of her own family, flowers, animals and violins. Her idealised buildings are recognisably local churches or town houses, all in embroidered colours that flow over their penned outlines.

Lydia’s welcome draws you in as if she’s been waiting for you to arrive and as if this place is already part of you. Once a model of Picasso’s  – she was Sylvette –  she was the girl with a pony tail who once graced the front of Paris Match and whose hair was so admired by Brigitte Bardot that she copied it and by doing so helped create her famous look.

My new collection, A Handful of Water has been blessed by Lydia’s painting of Godrevy Lighthouse as the cover. I saw this painting years ago and when Cinnamon Press agreed to publish my poems I knew what picture I hoped for as the cover.  Lydia is fascinated by lighthouses (so am I).

Lydia works in water colour, oils and acrylics. The thing about her is that she can’t stop creating and paints figures on bottles, stones and driftwood. She grew up on an island off the coast of Southern France, one of those idyllic islands surrounded by water blue as a jewel where she and her brother swam. She said that she started painting at the age of 45 having brought up her family and that the act of drawing and painting always brings her peace.  She showed me how Picasso had depicted the fall of her hair, scraping the oil paint with the point of the brush. ‘I think he did it better than I can,’ she giggled.

http://www.lydiacorbettart.com/profile.aspx is a link to a recent short film made about her work.

A Handful of Water is to be launched at her studio on Thursday May 30th and all are welcome. In addition, I will be running a poetry workshop at Lydia’s, drawing on her pictures as inspiration on Saturday  June 15th at 2-4.30. (Booking is essential.)  Later in the year, I will be reading from the book at Exeter Uncut, Chester Library, Torbay Poetry Festival and the Poetry Café, London. See News & Events.

Here are some of her paintings: 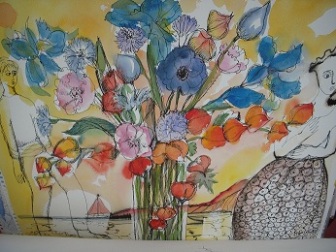 2 Responses to Lydia Corbett and A Handful of Water