Posted on February 5, 2018 by Rebecca Gethin

John Foggin is the latest Featured Writer.  He is a generous and tireless supporter of all poets so this is my endeavour to give some support back.  He’s very well known in the North but much less known here in the South West  so maybe this will help rectify that.

He is one of my favourite poets writing anywhere today as his poems burst from the page with a raw energy that looks effortless and easy and makes you see with new eyes.  Deft, always surprising and full of compassion.  He writes about landscape, birds, people and uses ventriloquy to get deep inside character and situation.

I finally got to meet John last year at South Downs Poetry Festival where his readings and also his workshop were full of verve.  I wrote more in his workshop than in most others anywhere and he stood up all through it and encouraged everyone: the room was packed too.  I had met his wondrous poetry before then and enjoyed his fulsome blog posts on his Cobweb so was looking forward to him reading.  I was also wondering what he’d be like as I was staying in the same house: he’s once put a picture of a sheep’s head (or was it a pig or an ox?) on a Facebook post of mine where I had been extolling the joys of reading in Iceland on long nights (I know chocolate was involved) and he’d said I had to accept they ate the pig’s head for Christmas dinner and I couldn’t have one thing without the other. Well, of course I went right off Iceland and, being veggie, I didn’t much like John’s gift either.  So it’s maybe understandable I was a bit trepidacious about what sort of no-compromise, no-nonsense person I was going to meet!  But you can’t meet John without him making you feel like an old friend with his insatiable sense of humour.

You can’t read his poetry without being captivated.  The first thing I noted was that the image on the front is a dead seagull on the sand so I thought he must be quite keen on images of dead things.  It’s what someone said all poets are obsessed about!

But it’s the musicality and the intricate tapestry of sound in his poems that makes them so memorable for me.  It’s a very distinctive voice that I hear in every poem I read.  He knows the true meaning of words as if he has fashioned them himself out of wood or of something solid and organic and he knows exactly how poems work.

I made this box,

Ran quick lead in the veins of driftwood roots,

the silver grain of bleached board and the wind-eyes

bound them with silver wire to honey oak, red pine,

and clenched them tight with sea-rust iron nails.

And he understands the power of voices, its cadences and tones:

There’s more to this than people think.

So listen. See, you want to get the build up right.

That one I took you to last week. All wrong.

What’s the good of flogging a chap

till he can’t carry a thing? He only ends up

dropping it, spectators want to help,

military jump in. A bloody circus.

(If you haven’t guessed that one is in the voice of the carpenter who makes crucifixes. )

When he read the following poem at SDPF I thought I couldn’t take anymore but there were indeed more like this one that evening, as you’ll see if you read his book, Much Possessed, which is one possession I keep near me:

here’s sometimes a loss you can’t imagine;
the lives never lived by your children;
the one who simply stopped
in the time it takes
to fall to the ground
from the top of a tower block.

No time at all.

They say gravity is a weak force.
I say the moon will draw a trillion tons
of salt sea from its shore.
I say a mountain range will pull a snowmelt
puddle out of shape.
I say gravity can draw a boy
through a window
and into the air.

There is loss no one can imagine

beneath you burned
the lights of Sheepscar, Harehills,
Briggate, Vicar Lane,
lights shone in the glass arcades,
on the tiles, on the gantries of tall cranes,
on the motorway tail lights trailed ribbons of red,
and you were far beyond falling.

Then you flared you went out
you flared like a moth and you blew
away over the lights over the canal
the river the sour moors the cottongrass
the mills of the plain
and over the sea and over the sea
and the bright west
and sank like the sun.

You might like to start following his Cobweb blog  and here’s more about him on this link too.  You might well feel you must get Much Possessed and you can find it here along with more poetry and brilliant reviews on The Poetry Business website.  But he has other great books too and you can see them all here.   (He even has special offers.) 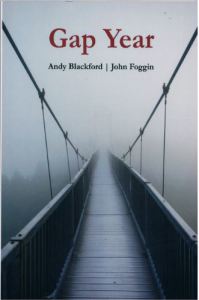