Julie-ann Rowell & ‘Voices in the Garden’

Julie-ann Rowell is the new Featured Writer with her gorgeous book Voices in the Garden, published by Belfast-based Lapwing Publications.This booklet is an exploration of the life of Joan of Arc and is given to us in many different voices that spit, bite, lie, lament, pray  and cajole. 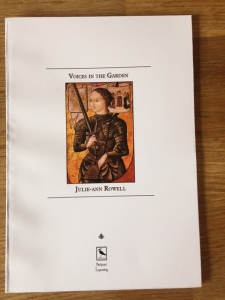 Joan of Arc was canonised in 1920 and so became St Jeanne. The first poem gives us the dictionary definition of a saint:  Performer of miracles; good and honest stock; pious; mentor; muse; enigma; inspiration; motivator; agitator; ballbreaker

But they are: Liable to be killed; roasted alive, battered, struck with arrows, beheaded, tied to a wheel and drowned, garrotted, boiled, shot.  Or die of old age.

They can be: Adored; unloved; revered; ignored; besotten

In Voices in the Garden Julie-ann shows how this played out in Jeanne’s life because she was all of these things but, above all, was also an extraordinary woman who had a passionate faith in God and of her country which turned into a mission that she miraculously turned into reality.  She was loved and loathed and finally beaten and burned and revered.  The poems are steeped in historical research which is always revealing and perfectly pitched. For instance, we learn that she wore her armour in bed and if you look at the poem Objets Sacres on the Featured Writer page you read:

The bascinet you wore into battle,

behind glass in a museum in New York City.

That last word left there on its own is brilliantly understated and in it I can hear the clash of metal on metal, the hefty thud through her body and I think of the battles this woman fought in.

Julie-ann catches the tone and cadence of a wide range of voices throughout the book from the Mad King Charles, his son the Dauphin to Jeanne’s mother (to name just a  few) who says I am chained to my daughter by my ribs, from the fire that burned her to the rumours that followed her:

The captain wrote on her behalf to the Queen of Sicily

The captain never wrote a word.

The captain gave her his sword.

The captain gave her his sword.

This beautifully presented little book deserves far more recognition for its courage and passion, for the finely crafted poetry that brings Jeanne d’Arc to life and the era in which she lived.

You can find more of Julie-ann’s exquisite poetry here on the Teignmouth Poetry Festival website https://www.poetryteignmouth.com/julie-ann-rowell.html

as well as on the superb Island Review.  http://theislandreview.com/content/poetry-julie-ann-rowell

Julie-ann writes about human rights abuses as much as about the natural world and life on Orkney.  Her beautiful limited edition pamphlet is titled The Sun at Midnight.

To all her writing she always brings the same qualities of compassion and perception.  I have known her for a long time and she is a very generous critical friend. As a tutor she brings erudition and inspiration to all the groups she teaches.  You can ask her about tutoring and mentoring here http://www.jarowell.co.uk/pages/teaching.html

She also writes wonderful fiction for children and for adults https://www.amazon.co.uk/Sea-Change-Julie-Ann-Rowell/dp/0954337727  which is about slavery and pirates, one of whom is female. The sequel is Shadow Dance.

Julie-ann will always continue to delve and to make her readers think quite a bit harder. 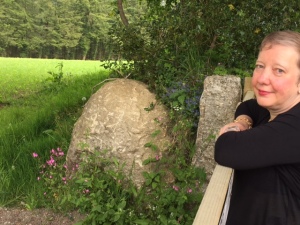 3 Responses to Julie-ann Rowell & ‘Voices in the Garden’