Stella Wulf with her book After Eden is the new Featured Writer.  I first‘met’ Stella on 52, the miraculous poetry group that prompted so many of us to write a poem a week for a year. During that time and ever since then, her poetry has grown wings and taken to the stars. This pamphlet is a stunning collection of poems that adroitly turns ‘life into lore’.

In the poem called Crow she explores our relationship with the natural world, its otherness and beauty while deftly bringing in crow folklore.  The effortless musicality of rhythm and sound here are part of its beauty.  She writes as a crow looks through the window:

but we’re on the threshold

he and I, perplexed creatures,

chipping away at ourselves.

This sewing together of syllables and vowels reminds me of complicated stitchery in the hands of an experienced needlewoman.

Take the stunning example of Alice in the Laundry Asylum from this page.  Alice is one of the unmarried pregnant women sent to one of the Irish Magdalene Laundry Homes for “fallen women”. One estimate states that 30,000 women endured these asylums. Wulf never states any of this but sustains Alice’s imprisoned misery through metaphor and imagery inherent in the surprising verbs and nouns to expose the terror beneath.

an eye to our limbs which were pliant,

On the next page is one of my (several) favourite and miraculous poems, Describing Mountains to a Blind Person:

Remember the weight of your new-born child,

the perfect roundness of his place in your arms,

how it took your breath….

This poem certainly made me hold my breath as each carefully phrased and inventive vignette rose up before me, perfectly articulating my own feelings for mountains and their metaphorical height and summits.

I haven’t mentioned sensuality of language yet but it’s everywhere in this meticulously-organised collection. In poems such as Painting with Swifts and Drawing from Life the words are rich and provocative but precise.  Nothing ever seems extraneous.  But then Stella is also a very accomplished artist and has a fine eye for colour and detail and movement.   Click Here for her remarkable paintings. 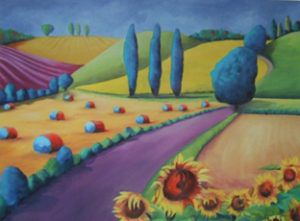 Here is an excellent informative interview about Stella which tells us a lot about how a writer is born and what Stella feels about writing: “Writing gives me time to think about what I want to say. It uncovers things I didn’t know I knew. It astonishes me.”

Stella Wulf, I would say, is an absolute powerhouse (but very modest) and has also written children’s books, covers designed and painted by herself of course!

In addition, she and poet-friends have set up a new publishing house called 4wordPress  and here is some information about it:  “In February 2018, a simple Facebook post expressing disappointment at a pamphlet rejection, despite the long wait, and being shortlisted, opened up a long thread of similar stories. In response to this wealth of demoralised talent going unrecognised, Stella teamed up with 52 Group friend, Lesley Quayle, to form 4Word Press, an independent, non profit making publisher of poetry pamphlets. In May 2018 they produced their first three pamphlets; Black Bicycle by Lesley Quayle, After Eden by Stella Wulf, and Androgyny by their invited poet, Kevin Reid, who they were lucky enough to scoop. Girl Golem by Rachael Clyne was launched on September 1st 2018. Stella and Lesley were delighted to able to represent Rachael and to bring her beautifully crafted narrative to a wider audience. The last pamphlet for 2018, which they are very excited about, will launch on December 1st. The author is yet to be announced but not to be missed! They aim to publish four pamphlets per year by invitation and have already secured writers for 2019 which will include a special anniversary edition. Stella also produces the cover designs under her own name, Claire Jefferson.”

1 Response to Stella Wulf & After Eden