Last month, much to my delight, poems in my limited-edition pamphlet Messages took flight in Liverpool. It was a winner in the first ever Coast to Coast to Coast single author pamphlet competition. My thanks and admiration go to Maria Isakova Bennett and Michael Brown who invented this innovative publishing venture.   Here is Messages:

Messages is a series of bird poems and is dedicated to my grandchildren in the hope that they will still be able to see and hear these birds in years to come.  My prize was twenty copies and I shall treasure this forever.  To have your own words in hand-stitched covers is a great honour.  In case any more grandchildren arrive (other than Maisie)  I had better keep some back!  Maria seems to have just a few left for sale and you can find them here.  Her journals are veritably works of art.

After I had read some of the bird poems an amazing young saxophonist called Nick Brant improvised bird music for at least ten minutes and nearly blew my socks off.  At first I thought I was imagining it but the person sitting in front of me turned round just afterwards and asked me what I thought about THAT?  Spine- tingling and truly awesome.    I do so wish it had been recorded so you could hear it!

And here is the winner, Jane Lovell’s wonderful journal of poems called Forbidden:

on the same link.   Jane was the Featured Writer on this blog last month too with her pamphlet, Metastasis.

The launch was wonderfully organised in the lovely new Open Eye gallery and I met several people, like serial-poetry-comp-winner Jane Lovell as well as Elizabeth Brooks from Foxglove.  And not forgetting the inimitable Michael Brown.

On the same evening the latest issue of the journal was being launched and eight of the poets had come to read their journal poem and a bit more so it was great to hear new voices and briefly catch up with John Foggin and Carole Bromley. I enjoyed all the readings from them and from  Penny Sharman, Jennie Owen, Janet Hatherley, Sandra Burnett, Laura Potts, Oliver Comins, Laura Potts.

Every three -four months or so Coast to Coast to Coast publish a new journal and the poems are selected by Maria and Michael. Every journal is individually designed and hand-stitched by Maria. You can find them here  – such a beautiful website.

Last summer Maria commissioned all poets who had been previously published in a journal to contribute 2/3 lines to a collaborative piece about the sea which was eventually exhibited at Aldeburgh Poetry Festival where Maria and Michael ran an excellent workshop. And I was privileged to read on behalf of C to C. 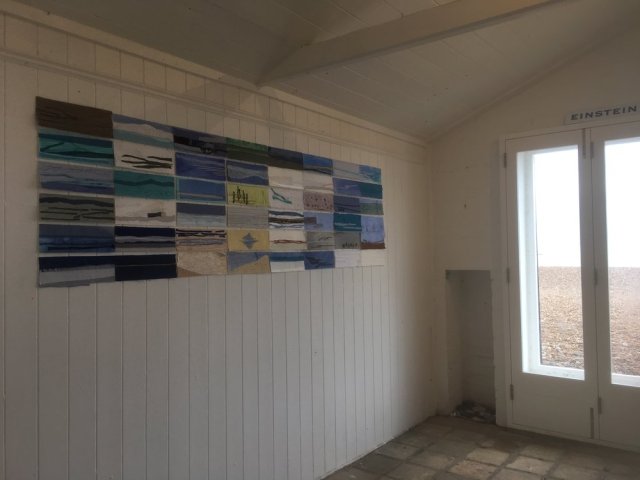 They are looking for new places to take the exhibition and the workshops.   This is a really innovative collaboration and I look forward to their next call-out and commend it to Festivals.

It was a really great adventure for me going all the way to Liverpool, with a long train journey from the middle of Devon, nerve-wracking because of split minute timing. ( I’d got the time of the event wrong when I booked the tickets, leaving myself only a leeway of thirty minutes to play with on arrival after a 5-6 hour journey from home.  But it was on time and I found my way to Open Eye gallery which was basically follow the sunset!)  Liverpool turned out to be a friendly and accepting city and despite having no-one to go out with afterwards (everyone had trains to catch) I enjoyed the following morning on a foggy Merseyside, visiting Tate Liverpool where I took in an exhibition featuring Fernand Leger and explored the dockside area.  All the buildings seemed huge to me but the wharves were human-size and the many statues were very appealing.  On every corner there were buskers attracting crowds of people. A vibrant place. Will be back some day! 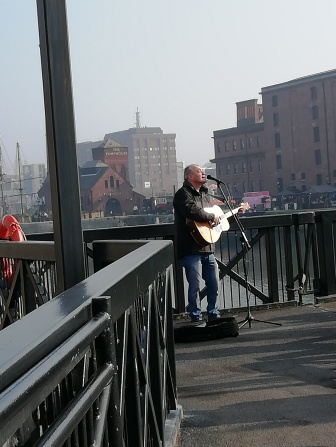 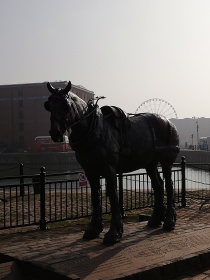 1 Response to Messages in Liverpool